Learning to Walk Again after COVID-19

FOR SOME PATIENTS THE EFFECTS OF COVID-19 can be debilitating long after the acute phase of the disease has passed. When Patricio Greco became free of the infection after a lengthy stay in an acute care hospital, he discovered his recovery journey had only just begun. The 59 year-old needed support from Runnymede to re-learn how to walk again.

In late March 2020, Patricio was working from home when he suddenly felt fatigued, and developed a fever. His wife called 91,1 and he was transported to an acute care hospital where he was diagnosed with COVID-19. His symptoms became so severe, so quickly that he was admitted to the intensive care unit (ICU) almost immediately. 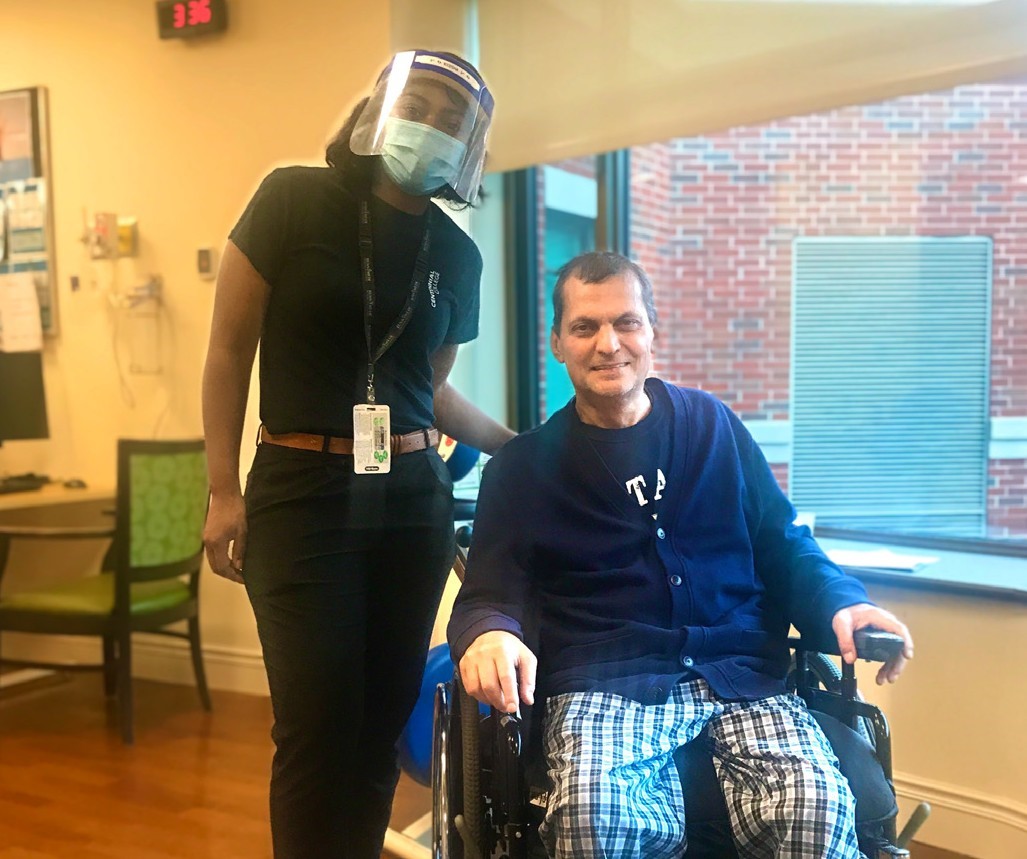 Incredibly, it wasn’t until July 13 when he was moved out of the ICU – more than three-and-a-half months after his diagnosis. For 12 of those weeks he was on a ventilator, and has little recollection of what happened over that period. All he knew is that he felt terrible.

“The whole time I was in the ICU, it was like I was in limbo,” he said. “When I eventually awoke my memory of what I’d been through was almost completely gone.”

After Patricio’s acute symptoms were treated in acute care, it was not safe for him to return home straight away. His exceptionally long stay left him highly deconditioned – he lost a lot of weight and strength, and was unable to stand on his own two feet.

Staff at the acute care hospital referred Patricio to Runnymede to continue his recovery journey.
Runnymede’s slow-stream rehab program was exactly what he needed to regain his independence. He
was admitted on August 14, and upon arrival had an immediate change in his outlook.

“When I first got here, I really didn’t know what to expect, but this place gave me a feeling of hope,” he said. “ The team motivated me to work hard and get better, and helped me feel like there was a future for me.”

Then the physiotherapists taught Patricio how to walk again. Referred to as gait training, it was a daunting task that had to be broken down into stages. First, Patricio had to re-learn when to shift his weight. Then, when to lift his feet. With time and practice it came back to him, and he was able to take his first steps with the support of a walker.

“I could see myself getting better and better all of the time,” he said. “The improvements I made were slow, but each day I was able to do something that I couldn’t do before. I could see a light at the end of the tunnel that got brighter every day.”

At the time of his discharge on October 3, 2020 Patricio could walk independently with a cane. He is even able to use stairs with support and is now looking forward to his safe return home, more than six months after his original admission to acute care.

“I’ve got an exercise plan that will help me get stronger once I’m back home, and I’m feeling very confident about it,” he said. “I’ve got so much to live for, now.”